In the mid-1950s, Willem de Kooning surprised the artists and critics of his time by single-handedly resurrecting the female form, which had been largely abandoned by his peers. Between 1950-54 he created a series of paintings and works on paper on the theme of the Woman, which by some were compared to goddesses and by others, to whores. The women in these works were naked, either depicted singly or in pairs, usually standing or seated and facing the viewer, presented unashamedly sexual, with grossly enlarged mouths, eyes, breasts, and vaginas. De Kooning said later about these works:   "Certain artists and critics attacked me for painting the Women, but I felt that this was their problem, not mine... I have to follow my desires.  "

In 1966 de Kooning executed a second series of Women drawings, this time with his eyes closed. In these works, the women are less confrontational and more seductive, but just as brazenly sexual. What may have made these works so scandalous at the time was that, despite their stereotypical depiction, de Kooning  's Women seem less like (sex) objects and more like subjects that embody not simply the artist  's desire but a desire of their own. They recall the famous dictum by the French psychoanalyst Jacques Lacan that desire is always the desire of the Other.

Piene is only one in a new generation of both male and female artists (Cecily Brown, Sue Williams, Kiki Smith, Matthew Barney, Jonathan Meese, to name but a few) whose works redefine art in terms of the body and take a closer look at the nature or shape of sexuality and gender.

The exhibition is curated by Klaus Ottmann, an independent curator and scholar based in New York. Mr. Ottmann most recently curated the Sixth International SITE Santa Fe Biennial (on view until January 7, 2007) and has been appointed as the curator for the 2007 Open ev+a exhibition in Limerick, Ireland. Bodies of Desire continues the Locks Gallery’s Curator’s Choice exhibitions. Previous curators include Barry Schwabsky, Richard Torchia, and David Cohen. An illustrated brochure with an essay by Ottmann will accompany the show. 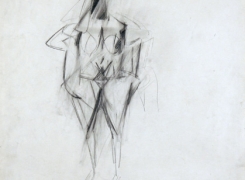