This is a collection of 21 portraits of writers, artists, friends and associates covering the period of 1934 to 1980. This survey of Neel's work followed the retrospective organized by the Philadelphia Museum of Art in 2000-01. Working apart from the abstraction-dominated New York art scene, Neel steadfastly pursued her own approach to representational art. Art historian and catalog essayist Sarah Powers states that Neel "bravely chose to re-invent the genre of portraiture, making it relevant to contemporary life." Through her determined fashion, Neel reshaped the modernist aesthetic and became the definitive American figurative painter of her time. Neel famously labeled herself a "collector of souls," and compared her range of subjects to "a human comedy." Again and again in Neel's work, the subject's personality emerges in swift flashes of emotion and soulful gazes. Neel penetrates her subjects' visages to reveal psychological insights, often hidden in public. Neel (born in the Philadelphia suburbs in 1900) spent most of her life in New York - initially in Greenwich Village, then for twenty years in Spanish Harlem. Her early models were lovers, neighbors and her family. When she moved in 1962 to 107th Street on the West Side of Manhattan, Neel increasingly chose friends and colleagues from the art world as subjects. Remarkably Neel was overlooked by museums in the 1930s and 1940s. Beginning in the 1960s, curators and writers started to recognize Neel's achievement and her fame grew accordingly. Between 1960 and 1984, the year of her death, Neel was included in dozens of museum exhibitions. Her work is in over 60 museum collections, including MoMA, the Metropolitan Museum of Art, the National Gallery of Art, Philadelphia Museum of Art, the Art Institute of Chicago and the Whitney Museum of American Art. 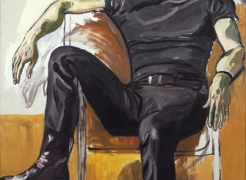