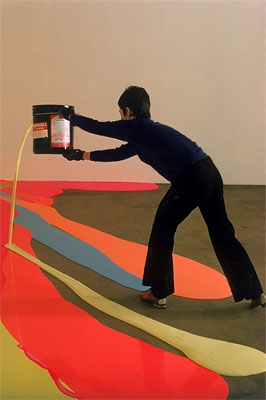 This travelling exhibition spans the range of Lynda Benglis's career, including her early wax paintings, her brightly colored poured latex works, the Torsos and Knots series from the 1970s, and her recent experiments with plastics, cast glass, paper, and gold leaf. It features a number of rarely exhibited historic works, including Phantom (1971), a dramatic polyurethane installation consisting of five monumental sculptures that glow in the dark, and the installation Primary Structures (Paula's Props), first shown in 1975. Alongside her sculptural output, Benglis created a radical body of work in video, photography, and media interventions that explore notions of power, gender relations, and role-playing. These works function in tandem with her sculpture to offer a pointed critique of sculptural machismo and suggest a fluid awareness of gender and artistic identity. They also contribute to an understanding of the artist's objects as simultaneously temporal and physically present, intuitive, and psychologically charged.