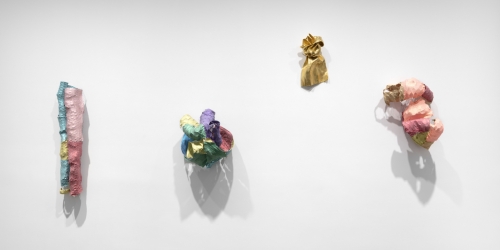 Resembling a melting hillock, comically propped up with an array of bars cast in stainless steel, HILLS AND CLOUDS, 2014, is a wonder to behold, an enormous sculpture in which Lynda Benglis’s depth of material knowledge is matched by a sheer ambition of scale. Milky green clouds made of phosphorescent polyurethane float above the gray metallic land and hedonistically frost its ridges. Though initially exhibited outside, on the grounds of Storm King Art Center, the sculpture has lost none of its grandeur and has, thankfully, not been over-cleaned in the interim. Little white rings of calcium speckle the glow-in-the-dark puffs, and slight discolorations mar the otherwise “stainless” steel. It makes a queer sort of sense that a work intended to resemble nature is now also partially its index.