Locks Gallery is pleased to announce the opening of Willem de Kooning, an intimate survey of the artist’s work, including vibrant canvases and drawings in charcoal and ink. The exhibition is accompanied by a catalogue by art historian Judith Stein.

Through twelve distinct works, spanning from the 1940s through the 1970s, Willem de Kooning highlights the artist’s strength in seamlessly traversing, and blending, abstraction and figuration. Throughout his career, de Kooning developed these seemingly incongruous styles, playing “a highly original and influencial game of tag in his work,” according to Stein. Utilizing immense brushstrokes and fluid coloration, de Kooning expanded on his surroundings, leaning strongly towards the abstract with massive streaks of rich color and natural tones, as seen in East Hampton VII (1975) and Duck Pond (1958).

An early work, the graceful Three Women (1943), showcases de Kooning’s finer touch and is more academically grounded than his later paintings. With delicate lines and ethereal details, Three Women presents his subjects as classical muses in a posed scene surrounding a Grecian pitcher and wearing floor-length dresses. These gossamer figures (including one bearing a striking resemblance to his wife, Elaine) will introduce to some a rare aspect of de Kooning’s development as an artist, especially in light of his indomitable “Woman” paintings that followed.

Willem de Kooning (April 24, 1904 - March 19, 1997) was a Dutch-born American painter who rose to prominence in the mid-twentieth century as one of the leading figures of the American Abstract Expressionism movement and New York School of painters. He was particularly known for his gestural abstraction or “action painting” style. Starting in the 1930s de Kooning worked simultaneously with figurative and abstract compositions, ultimately fusing the two to create his own idiosyncratic style. In 1950s New York, when painters like Jackson Pollock and Franz Kline were moving away from representational imagery toward pure abstraction, de Kooning maintained a commitment to the figurative tradition, developing a signature style that fused vivid color and aggressive paint handling with deconstructed images of the female form.“Flesh was the reason oil paint was invented,”he famously said. Over the next two decades de Kooning honed this style of abstracted figuration, culminating in his series Woman I–VI (1950-53), six seminal works subverting traditional depictions of women in the Western canon. From the early 1960s, de Kooning lived and worked in East Hampton, NY, where his home and studio still serve as an exhibition space and artist residency, known as the Elaine de Kooning House. Following his “Woman” series, de Kooning pursued non-objective lyrical abstraction until his death in 1997. 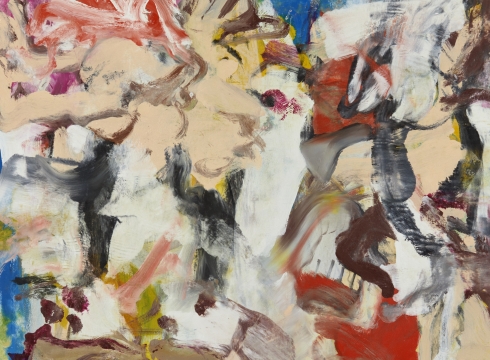