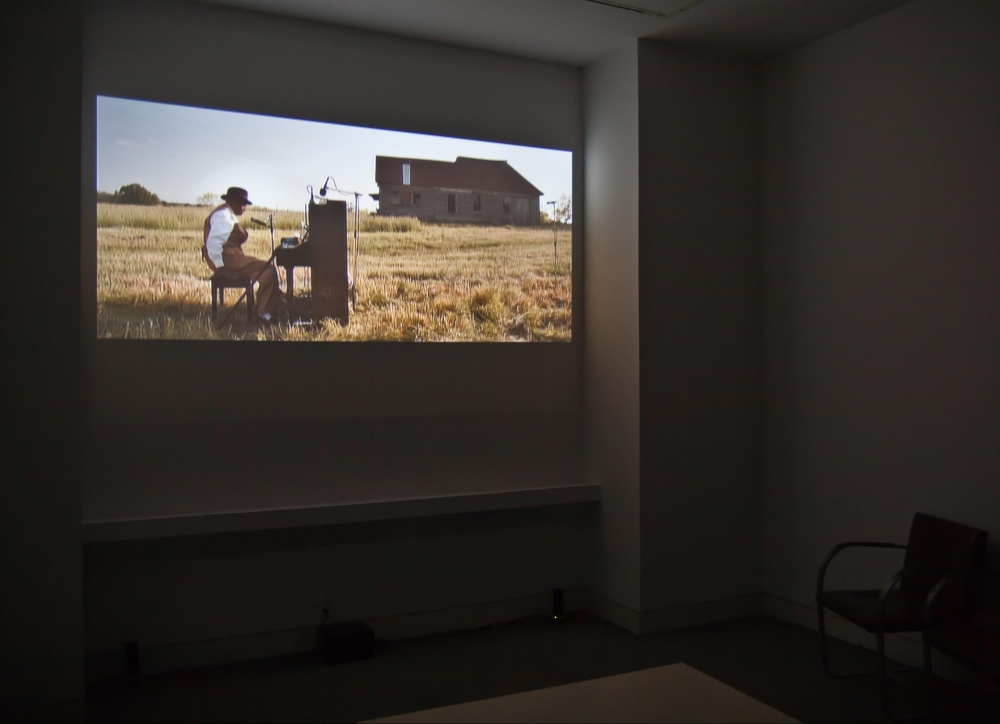 Locks Gallery is pleased to present True Stories, a group video screening curated by Lilly Wei, on view from January 13th through February 25th, 2012, with a reception on Friday, February 3rd, from 5:30 to 7:30 pm. True Stories is accompanied by an illustrated brochure with an essay by Lilly Wei (see below for downloadable PDF). True Stories seeks to explore one territory of video art, close to the documentary form. “Documentary is a form in constant evolution in our age of raucous, insistent, unmediated revelation... Inevitably, the idea of factuality has been complicated, the ratio of truth to invention fluctuating, as video artists and filmmakers redefine the genre, layering and expanding the documentary’s formats, altering its nature,” writes Wei.

Locks Gallery is pleased to present True Stories, a video screening curated by Lilly Wei, on view from January 13th through February 25th, 2012, with a reception on Friday, February 3rd, from 5:30 to 7:30 pm. True Stories is accompanied by an illustrated brochure with an essay by Lilly Wei (see above right link for PDF).

True Stories seeks to explore one territory of video art, close to the documentary form. “Documentary is a form in constant evolution in our age of raucous, insistent, unmediated revelation... Inevitably, the idea of factuality has been complicated, the ratio of truth to invention fluctuating, as video artists and filmmakers redefine the genre, layering and expanding the documentary’s formats, altering its nature,” writes Wei.

Wei selected twelve videos from artists around the world, some of which will be premiering in the United States (Jan Tichy, Stefanos Tsivopoulos, and Doug Fishbone). With one exception, the videos will be projected on two large screens in the gallery space, offering the viewers a theatrical experience.

The selection stands on a razor’s edge between documentary and fiction, questioning the verisimilitude of the moving image. Works like Amy Grappell’s and Tracey Emin’s are biographical, or autobiographical. Interviews give a first-hand testimony on events that we don’t see any image of (Dor Guez). Videos with no voice-over leave an open interpretation to the viewer. Double takes and behind-the-scene sequences suggest the interference of truthful emotions or intentional acting (Stefanos Tsivopoulos). Haendel and Ringbom’s dramatic close-ups scrutinize every expression of their characters’ faces. Qingsong and Fishbone directly question the trust that we place in images, taking the argument to two extremes, violence and hypnosis.

Feature-length videos, The Man (Kjartansson) and War after War (Leung) offer two rather different filmic biographies intertwined with philosophy, humor, and an aesthetic of repetition. Tichy’s Project Cabrini Green documents a four-week light installation in one of Chicago’s last standing project high-rises in the process of being razed. It will play in real-time over the course of thirty days, the duration of the original project.

Lilly Wei is a New York-based independent curator, essayist and critic who writes regularly for Art in America. She writes for several other publications here and abroad, frequently reporting on international biennials. The curator of a number of exhibitions in the United States, Europe and Asia, she is currently developing an exhibition of contemporary Israeli photographers and video artists for the Neuberger Museum of Art in Purchase, New York.

True Stories continues Locks Gallery’s Curator’s Choice exhibitions (previous curators include Peter Campus, Klaus Ottman, and Barry Schwabsky). An essay by Lilly Wei will be published in a brochure accompanying the exhibiton and is also available on the gallery website www.locksgallery.com.

Fikret Atay was born in 1976 in Batman, Turkey, a small Kurdish city close to the Iraqi border, where he lives and works. Atay has had solo exhibitions at Bonner Kunstverein, Germany; Hammer Museum, Los Angeles; Kunstverein für die Rheinlande und Westfalen, Düsseldorf; Viafarini, Milano, Italy; and the Vienna Kunsthalle. His work has been included in group exhibitions at the Tate Modern, London; New Museum, New York; and in several biennial exhibitions worldwide.

Tracey Emin was born in 1963 in Croydon, UK and is a British artist of English and Turkish descent. She was part of a group known as the YBAs (Young British Artists) and in 1997, she established herself with her piece Everyone I Have Ever Slept With (1963-1995). She was a Turner Prize nominee in 1999 and was invited to join the Royal Academy of Arts in 2007, the same year she represented Britain at the Venice Biennale. Her first major retrospective, 20 Years, debuted in Edinburgh in 2008, and toured Europe until 2009.

Doug Fishbone is an American artist living and working in London. Selected solo exhibitions include Tate Britain, London, and 30,000 Bananas in Trafalgar Square. His work was shown at the Busan Biennale, South Korea; and at the Hayward Gallery, London. He performs regularly at both international and UK venues, including appearances at London’s ICA and Southbank Centre. His most recent project Elmina had its world premiere at Tate Britain in 2010 and is currently on view at the ZKM Karlsruhe, Germany.

Amy Grappell was born in Brooklyn, New York and currently lives and works in Austin, TX. Her recent film Quadrangle was initially conceived as a video installation and selected for the New American Talent in Austin in 2009. As a film, it premiered at Sundance in 2010, winning an honorable mention jury prize, and won both Best Documentary Short and the Wholphin Best Short Film award at SXSW (2010). Grappell is currently working on a narrative screenplay based on the group marriage story.

Dor Guez is a Jerusalem-born artist working in photography and video. He currently lives and works in Tel Aviv. Guez’s personal history, as a scion of Palestinian-Christian and Tunisian-Jewish parents, plays an important role in his artistic practice. Guez’s work has been the subject of several solo exhibitions, recently at Petach Tikva Museum, Israel; Jewish Museum, New York; KW Institute for Contemporary Art, Berlin; Tel Aviv Museum of Art; and Beursschouwburg, Brussels.

Karl Haendel was born in New York, and lives and works in Los Angeles. His photorealistic graphite drawings reproduce images culled from the world of mass media and everyday objects, calling into question art world conceptions of originality, production, and reproduction. His work was the subject of a solo exhibition at LA MOCA, and has also been included in group exhibitions such as P.S.1, New York; Orange County Museum of Art; the Whitney Biennial (2006), MoMA, New York, Massachusetts Museum of Contemporary Art and Prospect.2, New Orleans (2011). Swedish filmmaker Petter Ringbom graduated from Cooper Union School of Art. He has taught at Parsons School of Design and NYU, and served on the board of the American Institute of Graphic Arts. His film May Fly premiered at Stockholm International Film Festival and his first feature documentary The Russian Winter will be released in 2012.

Fahed Halabi was born in Majdal Shams, a village in the Golan Heights in Israel, and currently lives and works in Paris. Solo exhibitions in venues such as Dear Noga Art Window and Hamidrasha Gallery in Tel Aviv, Fateh Modarris Art Center in Majdal Shams in the Golan Heights, as well as in exhibition spaces in Bilbao & Guernica, Spain. His works have also been displayed in various group exhibitions worldwide, at institutions such as geh8 gallery, Dresden; Memoire de l’Avenir Gallery, Paris; The Herzliya Museum, The Jaffa Museum, and The Gefen House, Haifa. Ala Farhat was born in Buka’ata, a village in the Golan Heights in Israel. He currently lives and works in Chicago. His work was shown in art centers throughout the Golan Heights and in the exhibition Men Under the Sun at the Herzliya Museum, Israel, in 2009. Farhat founded the Gadal Art Center in Buka’ata in 2005.

Ragnar Kjartansson was born in Reykjavík, Iceland, where he lives and works. He has been the subject of numerous solo and group exhibitions, most recently at the Frankfurter Kunstverein, Germany; Carnegie Museum of Art, Pittsburgh; BAWAG Contemporary, Vienna, Austria; and Hafnarborg, Hafnarfjörður, Iceland. In 2009, he was the youngest artist to represent Iceland at the Venice Biennale’s International Art Exhibition.

Simon Leung was born in Hong Kong. He has participated in the Guangzhou Triennial (2008), the Luleå Summer Biennial (2005), the Venice Biennale (2003), the Whitney Biennial (1993), and has also exhibited at MoMA, New York; Art Institute of Chicago; Generali Foundation, Vienna; 1a Space, Hong Kong; NGBK, Berlin; and Sala Mendoza, Caracas. In 2008, he received a Guggenheim fellowship and the Art Journal Award for his essay, The Look of Law.

Jan Tichy was born in Prague, Czech Republic, and lives and works in Chicago. He works at the intersection of video, sculpture, architecture, sound and photography; many of his works combine these elements. Tichy has had one-person exhibitions at Museum of Contemporary Art, Chicago; and Center for Contemporary Art, Tel Aviv. Upcoming shows and events include laboral - Centro de Arte y Creacion Industrial, Gijón, Spain; The Wadsworth Atheneum, Hartford; and the Indianapolis Museum of Art.

Stefanos Tsivopoulos was born in Prague and is a Greek artist living between Amsterdam and Athens. He is the recipient of the Golden Cube Award for best video installation at the 25th Kasseler Documentary Film Festival in Kassel, Germany. Recent solo shows include Heidelberg Kunstverrein, Germany; Smart Project Space, Amsterdam, the Netherlands; Art Forum Berlin, Germany. His work was recently included in group exhibitions at Witte de With, Rotterdam, the Netherlands; Centre Pompidou, Paris, France; and BFI Southbank, London, UK.

Wang Qingsong was born in Daqing, China, and lives and works in Beijing. Qingsong is a photography and video artist who has exhibited internationally at such venues as the Sydney Biennale, Australia; the Gwangju Biennale, China; Getty Museum, Los Angeles; Hammer Museum, Los Angeles; National Gallery of Canada. He recently had solo exhibitions at the International Center of Photography, New York; Kunsthalle Nexus, Saalfelden, Austria; and Baltic Contemporary Art Center, Gateshead, UK.