Emerging from the experimental Philadelphia art scene in the early 1970s, Warren Rohrer (1927-1995) became known for his luminous, meditative paintings that concentrate intensely on subtle shifts of color and the steady repetition of the artist’s stroke.

In conjunction with the publication of Warren Rohrer (2016)—co-published by Locks art Publications and the Allentown Art Museum— Locks Gallery is pleased to present an exhibition of Rohrer's mature works from the 1970s through the early 1990s.

The monograph, designed by Takaaki Matsumoto and authored by philosopher and art critic David Carrier, is the first to trace Rohrer’s trajectory over 40 years, describing the highly unorthodox arc of his life—from Mennonite stock in rural Pennsylvania to prominence as an exceptional abstract painter of the late 20th century. Carrier’s account gives a rich understanding of Rohrer’s quest to unite paint with atmosphere, land and light, as well as the artist's enduring connection to Lancaster County, where he grew up. An essay by Elaine Mehalakes looks at Rohrer’s enigmatic Field Language series from the 1990s. 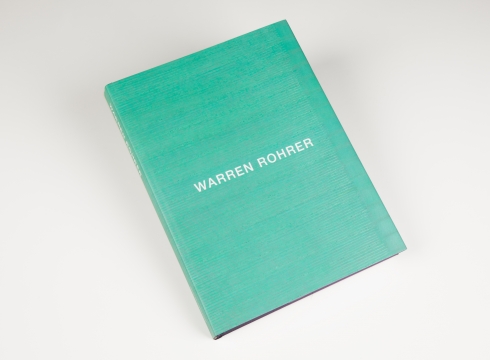