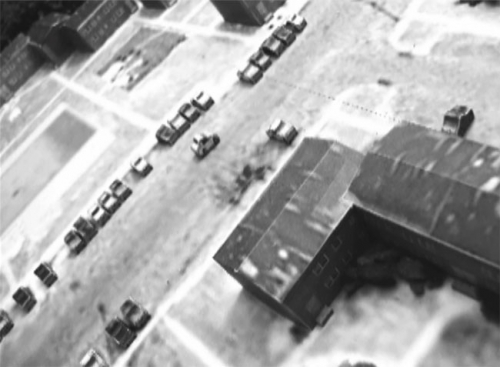 This exhibition presents three unique histories re-imagined through the spatial contexts in which events transpired with works by David Dempewolf, Ragnar Kjartansson, and Eve Sussman & Rufus Corporation. Highlighting artists who regularly use collaboration at the core of their practice, each of their three video works makes reference to geo-political histories while simultaneously making a series of allusions to other specific cultural works. As Michel Foucault stated in 1967, “We are in the epoch of simultaneity: we are in the epoch of juxtaposition, the epoch of the near and far, of the side-by-side, of the dispersed.”

Locks Gallery is pleased to present Of Other Spaces, bringing together a trio of video works by David Dempewolf, Ragnar Kjartansson, and Eve Sussman & Rufus Corporation. The works will be on view July 17 through August 22, 2014. A reception will be held on July 17th at 5:30 pm, in conjunction with a gallery talk for Nadia Hironaka and Matthew Suib.

This exhibition presents three unique histories re-imagined through the spatial contexts in which events have transpired. Highlighting artists who regularly use collaboration at the core of their practice, each of their three works makes reference to geo-political histories while simultaneously alluding to other cultural works. As Michel Foucault stated in 1967, “We are in the epoch of simultaneity: we are in the epoch of juxtaposition, the epoch of the near and far, of the side-by-side, of the dispersed.”

David Dempewolf’s site of lingering catastrophes... (have you got it yet?) laments the suicide of Walter Benjamin in Portbou in September of 1940, as he attempted to flee France. His plan was foiled as he was turned over to authorities due to improper paperwork and was to be deported back to Germany, where he chose to end his own life. Dempewolf references the narrative arch of Wim Wender’s Wings of Desire, and presents an angel that inserts the proper French exit papers into a book Benjamin was known to have been researching in the Bibliotech Nationale in Paris—embodying a desire for the German Jewish intellectual to have met an alternate fate.

Ragnar Kjartansson’s S.S. Hangover is two-channel work that accompanies a performance and kinetic sculpture that was in continuous daily motion during the 55th Venice Biennale in 2013. Kjartansson transformed a 1934 wooden fishing boat from Reykjavík into a hybrid marine vehicle of Greek, Icelandic, and Venetian origins. Taking design cues from the theatrical boat that appeared in the party scene in the 1935 film, Do You Remember Last Night, the boat and its brass sextet of passengers set sail between the two landings of the canal in Arsenale. This historic shipyard (named Gaggiandre) was a site chosen by the artist because it was the fabrication hub for the notorious naval fleet of The Republic of Venice (late 7th century through 1797). Building upon the artist’s other durational looping musical performances, the brass sextet continually plays a composition by composer Kjartan Sveinsson. Occasionally, a single player is left at the dock playing alone while the rest of the sextet sets sail across the canal, creating a stereoscopic sonic effect.

Eve Sussman and Rufus Corporation’s Aquarium is a brief tableau vivant that is part of Sussman’s epic 80-minute masterwork, The Rape of the Sabine Women. The work re-interprets the myth of the founding of Rome, inspired by the Neo-Classical painter Jacques-Louis David’s The Intervention of the Sabine Women (1794–1799). After being abducted, raped, and forced into marriage by Roman warriors, the Sabine women had to settle the battle between their revengeful families and their new husbands to secure peace for the future of the civilization. Re-imagined in a modern context, Sussman’s Roman warriors and Sabine women are portrayed as the stylish mid-century bourgeoisie. In Aquarium, their married and domestic life is recast as a family party in a 1960s beach house, shot on the Greek island of Hydra, claustrophobically removed from reality by a modernist glass architectural façade. While the original myth celebrates the birth of a peaceful society, Sussman’s piece mourns the erosion of a utopia.

David Dempewolf is a Philadelphia based artist and co-founder of Marginal Utility Gallery with his wife Yuka Yokoyama. A graduate from PAFA, The University of Pennsylvania, and Columbia University, Dempewolf completed residencies at the Whitney Independent Studio Program and Skowhegan School of Painting and Sculpture. Dempewolf recently collaborated with the pianist/composer Jason Moran (2010 MacArthur Fellow) on the nationally-touring multi-media project In My Mind. Additionally he worked with saxophonist/composer Miguel Zénon (2008 MacArther Fellow) on the project Identities: Tales from the Diaspora. His work has been exhibited at venues including Greene Naftali, New York City; Vox Populi, Philadelphia; Contemporary Arts Center, Cincinnati; Whitechapel Gallery, UK; the Internationale Kurzfilmtage Oberhausen, Germany; and the BFI London Film Festival, UK.

Ragnar Kjartansson is an Icelandic interdisciplinary artist who lives and works in Reykjavík. After studying at the Icelandic Academy of the Arts, his work has been exhibited internationally, including recent solo exhibitions at the New Museum in New York City, Migros Museum fur Gegenwartskunst in Zurich, the Fondazione Sandretto Re Rebaudengo in Turin, Frankfurter Kunstverein, and the BAWAG Contemporary in Vienna. In 2009, he was the youngest artist to represent Iceland at the Venice Biennale. Song, his first American solo museum show, was organized by the Carnegie Museum of Art in 2011, and subsequently traveled to the Museum of Contemporary Art in North Miami and the Institute of Contemporary Art in Boston. Kjartansson was the recipient of Performa’s 2011 Malcolm McLaren Award for his performance of Bliss, a twelve-hour continuous performance of the closing aria of Mozart’s The Marriage of Figaro.

Eve Sussman is a British-born American artist and filmmaker currently living and working in Brooklyn. The Rufus Corporation is an evolving group of international collaborators founded in 2003 including actors, musicians, dancers, musicians, and other creative professionals. Her acclaimed work 89 Seconds at Alcazar debuted at the 2004 Whitney Biennial. Other major works have been exhibited internationally at venues including the Museo Nacional Centro de Arte Reina Sofia, Spain; MoMA, New York City; the Modern Art Museum, Fort Worth; the IFC Center, New York City; SFMoMA, San Francisco; the Moscow International Film Festival, Russia; and Project Space 176, UK; and the Bass Museum of Art, Miami Beach.