August 2008, Philadelphia, PA–Locks Gallery is pleased to present an exhibition of ceramic sculpture by Jun Kaneko, on view October 3–November 8, 2008. There will be a reception for the artist on Friday, October 3, 5:30-7:30 pm.

Jun Kaneko, the internationally-known ceramic artist, will exhibit monumental sculpture on Locks Gallery\'s roof garden. This outdoor installation represents his largest exhibit in Philadelphia and coincides with the premier of his design for the Opera Company of Philadelphia\'s production of Fidelio (October 10–24, 2008).

In his installation at Locks Gallery, the seven-foot tall ceramic works will be shown outdoors with the city skyline as a backdrop. Working in an industrial space with beehive kilns, Kaneko has created some of the largest ceramics works ever attempted. Initially trained as a painter, the ceramic works exhibit Kaneko\'s refined, elaborate glazes; their expansive surfaces act as canvases for the artist\'s geometric abstraction.

He titles his monolithic, hollow-cast sculpture on view at Locks, \"Dangos\" (dumplings in Japanese). Art critic Arthur Danto has described Kaneko\'s dangos as \"an extraordinary creation, inasmuch as it combines monumentality with warmth and a kind of emotional lightness.\" The earliest works in the series date from the 1980s and the series was shown in a 2006 retrospective at the National Museum of Art, Osaka, Japan.

Kaneko, born in Nagoya, Japan has pursued a dynamic and varied studio practice in painting, sculpture, ceramic and glass since studying in Los Angeles in the 60s and apprenticing with ceramist Peter Voulkos. The Omaha-based artist has shown extensively in the U.S. since 1964 and has had exhibits in Finland, Norway, Japan, South Korea and Canada. 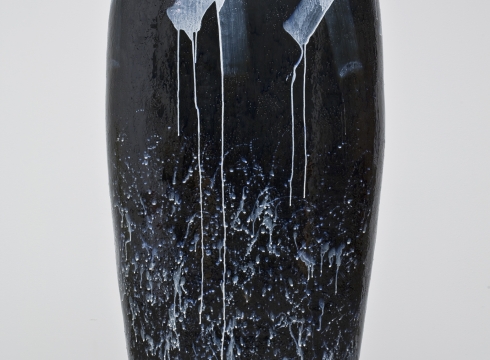