December 2008, Philadelphia, PA – Locks Gallery is pleased to present an exhibition of new vases and paintings by Jane Irish. Cochin Chinoiserie will be on view January 9th through February 21st, 2009. There will be a reception for the artist on Friday, January 9, 2009, from 5:30 to 7:30pm.

In her second exhibition at Locks Gallery, Jane Irish will show new ceramic vases reflecting her continued exploration of the politics and aftermath of the Vietnam War and the aesthetics of decadence. Irish will debut ten new vases modeled after 18th and 19th century French Sèvres porcelain which have images of Vietnamese landscapes and decorative detailing. These works feature poetry by Vietnam Veterans and noted visual arts writers, such as Vincent Katz, Carter Ratcliff and Thomas Devaney. They will be seen against the backdrop of a large painting, incorporating protest imagery and rococo interiors.

Irish, nominated in 2008 by The Print Center, received an Independence Foundation Fellowship and spent twenty-five days traveling and working in Vietnam. While there, Irish painted en plein air, capturing peaceful sites which were once the backdrop to combat during the Vietnam War. In coming to terms with the impact of American brutality and its legacy, Irish seeks the transcendent nature of art and “the universality of painting” in addressing the complicated history between the two nations.

Irish received her MFA from Queens College, CUNY, and has exhibited in New York and Philadelphia since 1983. Irish’s ceramic work can be seen in the Institute of Contemporary Art’s exhibition, Dirt on Delight: Impulses Which Form Clay (Jan 16 - Mar 29, 2009), which travels to the Walker Art Center in Minneapolis, MN. In 2002-03, Irish created a large-scale installation for the Pennsylvania Academy of Fine Arts - her first solo museum exhibition, titled History Lesson. 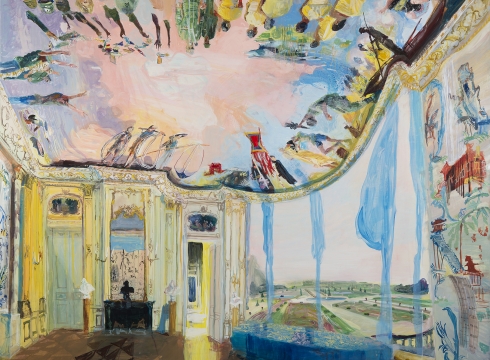