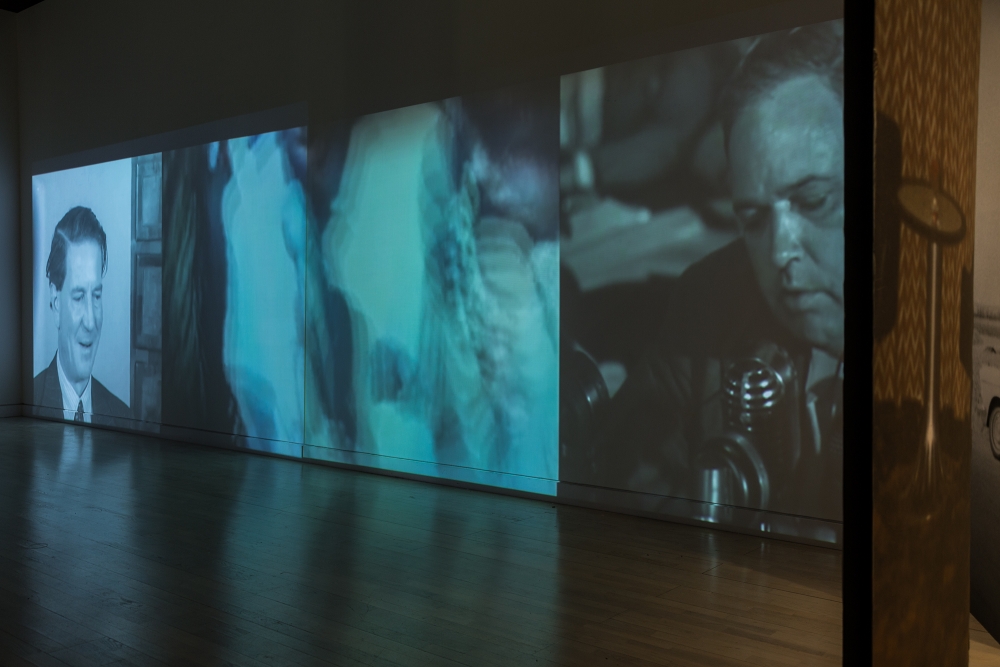 Locks Gallery is pleased to present No Food, No Money, No Jewels, an installation of videos, photographs, and sculptural works, by New York-based artists Simon Lee and Eve Sussman. There will be a reception and artist talk on Friday, January 15, 2016 from 5:30–7:30 pm.

Situated in a fictitious factory setting designed by Lee and Sussman, No Food No Money No Jewels, a film you walk through, tells a story of “inveterate power struggles that defy history, time and any sort of happy ending.” The 18-chapter film, which was commissioned in 2014 by the Experimental Media and Performing Arts Center (EMPAC) in Troy, NY, portrays 12 factory workers in a gigantic multi-tiered scaffolding, bailing water and performing “a choreography” of an assembly line. The characters represent archetypes, from the Line Worker to the Master of Industry. They are also animals masterfully disguised as humans.

In the film, we meet two factory mechanics, Bear 1 and Bear 2; the boss, Rabbit; the foreman, Owl; the line worker, Pig; two janitors, both Donkeys; a mysterious provocateur, Tiger; and a character simply known as Small. In the lunchroom at the factory, intrigue is rife: Small has disappeared and been replaced by a suspicious character, Tiger. Tiger sews seeds of conspiracy and corporate espionage. Discontent grows in the factory and Pig, the Bears and the Donkeys are pitted against Rabbit and Owl. Everyone is questioned and accused; yet seemingly no one is guilty.

No Food No Money No Jewels is built around 3 compositional parts:

• The ensemble choreography of the water factory

The scripting for each scene is a combination of original writing and the audio streamed to the actors. The characters establish their relationships to their work and each other based on the plots and personalities that are revealed in the words of the figures they parrot: Marcel Marceau, Charlie Watts Lance Loud, Princess Diana as well as famous liars: Jimmy Hoffa, Kim Philby, Aldrich Ames and Lance Armstrong to name a few. The speech patterns and themes that emerge in the characters’ dialogues, notions of labor, commodity and the economy, as well as individual work ethic and public responsibility, are embedded in the legacies of these famous/infamous figures.

The exhibition of No Food, No Money No Jewels at Locks Gallery will re-stage elements from the original production, including large-panel photographs, which were used as backdrops and floor pieces for the film, installed in the gallery as a kind of architectural labyrinth. The installation will include single channel videos and multi-media sculptures sited throughout the photographic labyrinth - creating the effect of a four-dimensional film through which the viewer moves.

No Food No Money No Jewels debuted in 2015 in an installation at the James Farley Post Office in New York City as part of the SPRING/BREAK Art Show during Armory Arts Week. It was commissioned by EMPAC at Rensselaer Polytechnic Institute in Troy, NY and curated by Ash Bulayev; it is a co-production of the Cicero Foundation and The Robert D. Bielecki Foundation. Filmed in a 10,000 square-foot theater at EMPAC, the space was used as a continually in-flux sound stage, combining the multi-tiered photographic set with EMPAC’s state-of-the-art lighting, rigging, video, audio and theatre technology. Additional sponsorship has come from The They Co., E&T Plastics, B&H Photo, K&M Camera, Lexjet, Ableton and Artists & Craftsman Supply.

Simon Lee (born 1956) works in photography, video and installation. His work is said to often be “a powerful metaphor for the random flow of history and a low tech formal tour de force” (Holland Cotter, New York Times). His 2010 film collaboration with Algis Kizys, Where is the Black Beast? (2010) was shown at the Sagamore Collection in Miami, Zebra Poetry Film Festival Berlin, IFC Center in New York, and was an official selection at the 2011 Rotterdam Film Festival. Together with Sussman, he co-founded the “Wallabout Oyster Theater,” a micro-theater space run out of their studios in Brooklyn. Lee has exhibited at the Brooklyn Museum of Art; The Berkshire Museum, MA; Roebling Hall, New York; the Moscow International Film Festival; Musée d’Art Contemporain de Montreal; Poznan Biennale, Poland; The Rotunda Gallery, Brooklyn NY; Tinguely Museum, Basel, Switzerland; Espace Paul Ricard, Paris, France; and The Whitney Museum of American Art, New York.

Locks Gallery is located at 600 Washington Square South in Philadelphia, PA. Gallery hours are Tuesday through Saturday, 10 am to 6 pm. For additional information, please contact Locks Gallery at 215-629-1000, fax 215-629-3868, or email info@locksgallery.com 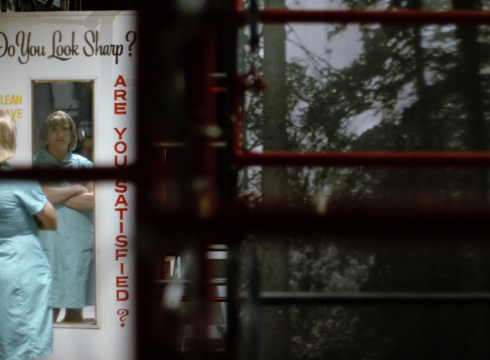